In the heart of Beaujolais Crus

The Château de la Terrière has stood in Cercié, facing Mount Brouilly,since the 14th century, in the heart of the Beaujolais region. It is one of the oldest estates in the region.

After belonging to successive generations of lords, Château de la Terrière was bought in 2003 and important works have been done in the cellars and in the vineyards.

Grégory Barbet, today manager of the Château, is the 9th génération of a winegrowers family. He is also owner of Domaine de la Pirolette with his wife Virginie.

Frédéric Maignet is the winemaker of Château de la Terrière. He is also consultant oenologist for numerous other estates in Beaujolais. 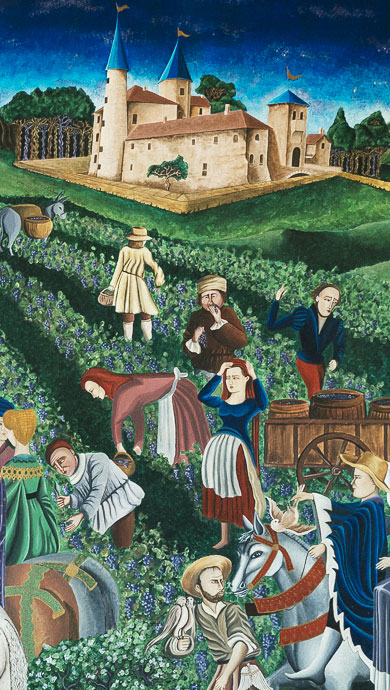 The vines of the Château

The vines at Château de la Terrière are on average 50 years old. They grow south-facing, half-way up the side of a deep, dry pink granite hill for Brouilly and Régnié, on manganese and iron oxyd-rich soils for Moulin-à-Vent and well-drained sandy soils for Fleurie.

In 2010, the estate became a pioneer when it planted the Pinot Noir at Cogny, grape in the Pierres Dorées area.

Respect for the environment and for fruit

The vines are grown according to reasonable farming methods. The soils are worked with machines, with as little intervention as possible. Basically, everything is done precisely and accurately, to enhance the expression of the soils and respect the vines.

he approach is traditional with the harvests done by hand. The bunches are put in trays to avoid squashing and to make sorting the grapes far easier.

Recently, sowing of clover was realized on the cover planted plots of land to limit the weeding, restructure the ground and fix the atmospheric nitrogen.

The plot of La Tour Bourdon holds a surprising pyramid of stoneware blocks, and is as well one of the remarkable 'Géosites' of Beaujolais. This stoneware was formed there 200 million years ago but the origin of the creation of these round blocks remains a riddle which makes debate at the geologist's.